...could attack enemies with barrages of sword thrusts within a second.

Tohka Todo's (Rakudai Kishi no Cavalry) nigh-invincible battōjutsu Raikiri infused with lightning, grants her strike speed which transcends the speed of sound, releasing blinding light and huge amount of heat in the process.
Add a photo to this gallery 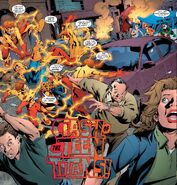 Shadow the Hedgehog (Sonic the Hedgehog), can use his incredible speed to boost his strikes to devastating levels, in the same manner as his rival Sonic.
Add a photo to this gallery
Retrieved from "https://powerlisting.fandom.com/wiki/Speed_Strike?oldid=1469271"
Community content is available under CC-BY-SA unless otherwise noted.