The power to swim at incredible speeds. Variation of Enhanced Speed.

The user can swim at incredible speeds, unrestricted by water resistance.

Jetray (Ben 10: Alien Force/Ultimate Alien) can fly and swim faster than the speed of sound.

An Ichthyosaur’s (Hλlf-Life series) speed in terms of swimming power is incredible, allowing them to catch up to prey within a matter of seconds.

Using Blue Walk, Sanji (One Piece) can swim at speeds rivaling those of a Fishman.

The Fishmen (Serious Sam) are fairly fast swimmers, being able to catch up with their squadron and opponents in a certain amount of seconds.

...while in squid form can swim through ink faster than their human forms can run.

...while in octopus form can swim through ink faster than their human forms can run. 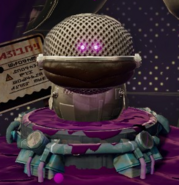 The Ravenous Octomaw (Splatoon) can swim through ink faster than Agent 3 can.

As the King of the Ocean of Planet Drool, Sharkboy (The Adventures of Sharkboy and Lavagirl) can swim at incredible speeds.

Bai Tza (Jackie Chan Adventures)
Add a photo to this gallery
Retrieved from "https://powerlisting.fandom.com/wiki/Speed_Swimming?oldid=1755941"
Community content is available under CC-BY-SA unless otherwise noted.