The user is able to throw objects at very high speeds, causing great damage to whatever it hits. Most users throw smaller objects at high velocities, while some others with high strength can throw heavier things like cars and cannonballs to do massive damage. 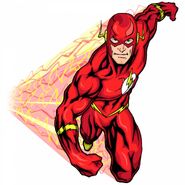 Monkey D. Garp (One Piece) throwing cannonballs like baseballs, firing them at a stronger force and speed than with an actual cannon.

Mario (Super Mario) throws a baseball with such force and speed that it ignites from air friction...

...and overloads a speed gun.

Sonic the Hedgehog (Sonic the Hedgehog) throws a rock with enough speed to catch up to Dr. Robotnik's getaway vehicle and destroy it.
Add a photo to this gallery
Retrieved from "https://powerlisting.fandom.com/wiki/Speed_Throwing?oldid=1508234"
Community content is available under CC-BY-SA unless otherwise noted.