Increase the strength and effects of spells.

The skill to increase the strength, duration, and potential of spells. Sub-power of Spell Casting. Opposite of Spell Negation. Variation of Power Augmentation.

User can increase the strength, duration, and potential of spells, making them more powerful and durable than usual. 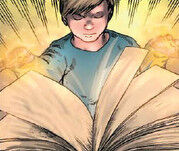 Xia Liu, Xia Xiong, Xia Mei and Ji Ruling (The X-Dormitory) cast a freezing spell together.
Add a photo to this gallery
Retrieved from "https://powerlisting.fandom.com/wiki/Spell_Amplification?oldid=1588290"
Community content is available under CC-BY-SA unless otherwise noted.