The ability to manipulate spherical objects. Variation of Object Manipulation

User can create, shape and manipulate balls, spheres and other round or ovoid objects of any sizes and material

Mineta (Boku no Hero Academia) creates sticky spheres with his quirk, Pop Off.

Strike Man (Mega Man 10) can attack with his Rebound Striker.

Very Good (One Piece) scattering his body into floating orbs.

Tathlum (Valkyrie Crusade) controls a magic orb that is hotter than fire and heavier than iron. 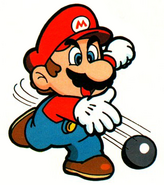 The Dodgeball Wizard (Codename: Kids Next Door) seeks to prove his mastery over his namesake game.

Orianna, The Lady of Clockwork (League of Legends)
Add a photo to this gallery
Retrieved from "https://powerlisting.fandom.com/wiki/Sphere_Manipulation?oldid=1660971"
Community content is available under CC-BY-SA unless otherwise noted.