The power to attack while spinning.

The Rampaging Octowhirl (Splatoon) using its spinning attack against Agent 3.

Link (Legend of Zelda series), in many incarnations, has always used the Spin Attack and powerful variations of it throughtout his quests.

Wu Sisters (Kung Fu Panda), can tie themselves together by their tails to perform...

Monkey D. Luffy (One Piece) rapidly spinning his legs to perform his Gomu Gomu no UFO.

Garen (League of Legends) tends to attack by spinning Judgement around. 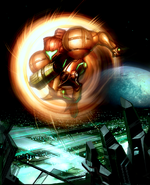 Using the Screw Attack, Samus Aran (Metroid) emits energy waves from points on her armor while she somersaults into the air, turning her into a spinning energy blade of destruction.

...or Digaru Doruzonisu.
Add a photo to this gallery
Retrieved from "https://powerlisting.fandom.com/wiki/Spinning_Attack?oldid=1741289"
Community content is available under CC-BY-SA unless otherwise noted.