A Grimm (Grimm) is an individual who can see the true form of Wesen.

Possess a heightened awareness/sensitivity to the paranormal.

The power to possess an increased awareness/sensitivity to the paranormal. Sub-power of Supernatural Detection.

Users possess a heightened awareness/sensitivity to the paranormal, allowing such feats as being able to see beings, such as spirits, ghosts, angels, and demons, that are normally invisible to humans.

Since he was a child, Ichigo Kurosaki (Bleach) has had an innate ability to clearly see spiritual beings and sense their presence.

As a Quincy, Uryū Ishida (Bleach) can sense Hollows at a significant distance.

Orihime Inoue (Bleach) has a good amount of skill in detecting spiritual energy.

After his encounter with the parakeet containing the soul of Yūichi Shibata, Sado Yasutora (Bleach) started to detect the approximate locations of spirits and Hollows, but could not fully see them.

Kaname Tousen (Bleach) is a blind Shinigami who uses his spiritual sense to compensate for his blindness.

Kagome Higurashi (Inuyasha) can see ghosts and spirits, as when she encounters Mayu Ikeda, a ghost girl who died in a fire.

Stands (JoJo's Bizarre Adventure) can be seen by their users and are invisible to ordinary humans. 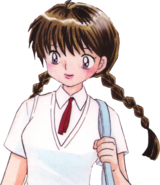 After she got spirited away to the afterlife as a little girl and ate a piece of candy, Sakura Mamiya (Kyōkai no Rinne) has had the ability to spirits and other spiritual beings.

Sasuke Uchiha's (Naruto) Rinnegan allows him to perceive distortions in the flow of time, able to see events that happen as normal, allowing him to see spirits even if time is stopped.

Due to his powerful willpower, Gill Bastar (WANTED!) can see and interact with dead souls.

After overusing her Sephiroth Grail, Valerie Tepes (Highschool DxD) suffered spiritual corrosion that allow her to talk with and apparently see the dead from the other world.

Kazuma Kuwabara (Yu Yu Hakusho) can sense and see ghosts that are invisible to the human eye: an ability his older sister Shizuru also has.

After dying and coming back to life, Yusuke Uramashi (Yu Yu Hakusho) developed this ability.

Ice King (Adventure Time) can see all sorts of things with his Wizard Eyes. 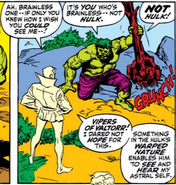 Due to his unique physiology, Bruce Banner/The Hulk (Marvel Comics) can see and hear astral forms.

Princess Elena (Elena of Avalor) can only see her spirit guide Zuco but in the spirit world or on the day of the dead she is able to see and hear all kinds of spirits/ghosts.

Juniper "June" Kim Lee (The Life & Times of Juniper Lee) is able to see even spirits.

What is invisible to Dean Winchester (Supernatural)…

…is visible to Crowley.

Ashley Robbins (Another Code) is able to see ghosts.
Community content is available under CC-BY-SA unless otherwise noted.
Advertisement