Illyana Rasputina/Magik (Marvel Comics) created and wields the Soulsword, a manifestation of her soul while she was trapped in Limbo.

"You believe yourselves immune to death? I bring you a gospel of oblivion. I bring you the Soulsword. Taste it and cease to be!"
― Illyana Rasputina/Magik (Marvel Comics)

The user can construct blade weapons, including daggers, swords, etc., out of spiritual energy. Due to the special properties spiritual energy possesses, it is not bound to limitations of other elements, making it very versatile. As it is part of the user, the life-force that composes the weapon can be manipulated/shaped to change the weapon's shape and attributes, adapting to the situation at hand.

Since the blade is made of life energy, its sharpness can be remarkably high compared to other types of blades or be reduced to a blunt but powerful weapon to cause smashing damage. Depending on the spiritual energy, skill, and concentration, it can be used to distort and cut through dimensions, or potentially anything, such as spiritual beings, deities and even alternate universes. The intense energy produced by the blade can also disintegrate objects on contact via something similar to heat energy, depending on the output.

Fright Knight (Danny Phantom) wields the Soul Shredder which sends those it cuts to a dimension where they experience their greatest fears.

Jack (Samurai Jack) wields a katana sword created by the gods, Odin, Ra, and Vishnu from the chi within his father. The sword possesses the power to destroy any evil, break curses,...

...and even harm the demon Aku himself.
Add a photo to this gallery

Misao Kusakabe (11eyes) wielding the Dōjigiri Yasutsuna, which devours life energy and turns it into great power around the blade.

Mine (Akame Ga Kill!) turning Roman Artillery: Pumpkin into a spiritual blade to cut down Seryu Ubiquitous. This does cause Pumpkin to overheat and unusable for a while.

Creed Diskenth (Black Cat) creating his Imagine Blade Level 1, which he can alter its length and visibility, out of his ki and linked to his psyche, and is immensely sharp... 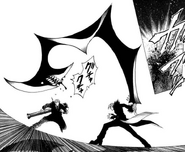 ...and utilizing the Imagine Blade Level 2, which becomes a solidified and sentient blade that can elongate at unsuspecting angles, cracking even Orichalcum.

...and later fuses it with his arm to form his Imagine Blade Level 3, granting him a solidified blade arm and a third arm of immense destructive power.

...and using his Imagine Blade Level Max, becoming a gigantic blade of light that can destroy anything, but when it shattered it caused him to be physically crippled.

Ichigo Kurosaki's Zangetsu (Bleach), like most Zanpakutō, has its powers and appearance dependent on the wielder's soul, its true form realized when he accepted his heritage.

Renji Abarai (Bleach) realizes his Bankai's true name, Sōō Zabimaru, and it transforms the blade into a weaponized armor of superior offense than his previous Bankai.

Kenpachi Zaraki (Bleach) managed to gain harmony with his Zanpakutō, Nozarashi, after he realizes his true strength, which allows him to gain its full potential and communicate with the spirit.

Genryūsai Shigekuni Yamamoto (Bleach) wields the strongest known Zanpakutō in its Bankai form, Zanka no Tachi, a testament of his soul being the strongest within Soul Society.

Tier Harribel's Tiburón (Bleach) is an example of a how an Arrancar's Zanpakutō, which has a rather peculiar form for a sword, still bears a close resemblance to that of a Soul Reaper's.

Nnoitra Gilga's Santa Teresa (Bleach) is an example of how Arrancar's Zanpakutō differs with each individual's soul, more diverse in form than a Soul Reaper's.

Cirucci Sanderwicci's (Bleach) Ala Cortadola wings are composed of high-frequency spiritual blades that can cut through pillars with ease via vibrations.

Coyote Starrk (Bleach) converting his bandoliers into spiritual particles, which he then concentrates into dual swords named Colmillo.

Ulquiorra Cifer (Bleach) forming his Lanza del Relampago, a lance of spiritual energy that can easily cleave through targets or cause devastating explosions when thrown.

Uryū Ishida (Bleach) using the Seele Schneider, the only traditional Quincy weapon that possesses a blade, with vibrating spiritual particles that sever target particles and absorb them for self-empowerment.

Quilge Opie (Bleach) creating a military saber out of spiritual particles, which can also produce protrusions to function as a bow.

Yhwach (Bleach) forming a gigantic sword out of spiritual particles that can cut through even the most durable opponents.

Krillin's (Dragon Ball series) Kienzan is a disk of razor sharp ki that can slice through anything.

...and Tsuibi Kienzan is a disk of razor sharp ki that can chase down and cut anything.

Vegito (Dragon Ball series) using his Spirit Sword to create an extendable sword of ki capable of piercing anything.

Janemba (Dragon Ball series) channeling his ki through his Dimensional Sword, allowing him to imbue his reality-warping powers into it, and cut through dimensions via slicing ki waves.

Zamasu (Dragon Ball Super) using his God Split Cut to create a blade of ki around his hand. Given that the God Split Cut is powered by Zamasu's godly ki, its powerful enough to cut large creatues and battle against Goku and Vegeta in their Super Saiyan Blue forms.

In his Super Saiyan Rosé form, Goku Black (Dragon Ball Super) can concentrate his aura into his Fierce God Slicer. Powered by his godly ki, the blade is powerful enough to pierce Vegeta in his Super Saiyan Blue form. Goku Black can also from the sword into a large schimtar that project piercing energy blasts, or a scythe that can cut through dimensions.

When his sword was broken in the battle with Fused Zamasu, Future Trunks (Dragon Ball Super) formed his ki around the broken to create his Light Sword...

...and during the final battle with Fused Zamasu, he collected the hopes within the ki of the people of Earth, allowing him to form the energy around his already ki infused longsword into the even stronger Spirit Bomb Sword.

Salza (Dragon Ball series) forming his Salza Blade, a sharp blade of ki capable of cleaving through trees with ease.

Gon Freecss (Hunter × Hunter) is able to channel his aura around his two fingers in order to create his Scissor blade.

Kurohime (Magic User Kurohime) wielding the Ultimate Sword, composed of the four Spirit Kings and can cut through absolutely anything.

Ryūgan (Naruto) flowing his chakra through the Garian Sword, transforming the jointed blade components into an ethereal chakra dragon.

Itachi Uchiha's Susanoo (Naruto) using the Sword of Totsuka, which can seal anything it pierces in an Absolute Illusion.

...his Final Susanoo's two spiritual katanas are capable of slicing through entire mountains...

Obito Uchiha (Naruto) forming the holy sword, Sword of Nunoboko, out of the Ten-Tails' chakra.

Sasuke Uchiha's Susanoo (Naruto) forming dual chakra swords, even one is strong enough to overpower the Sword of Nunoboko.

Samurai (Naruto) specialize in coating their swords in chakra to create very sharp and versatile blades.

Toneri Ōtsutsuki (Naruto) focuses his Tenseigan Chakra Mode into one of his Truth-Seeking Balls and grasps it into his hand to create his Golden Wheel Reincarnation Explosion, a giant golden sword made of pure chakra. The power of this blade is enough to completely cut the moon in half without slowing down.

Charlotte Linlin/Big Mom's (One Piece) bicorne hat Napoleon can transfer its own soul fragment into one of its retractable blades to become a deadly sword homie.

Being an Angel, Stocking (Panty and Stocking with Garterbelt) can form her stockings into spiritual katanas, Stripes I & II. The blades are able to hurt any spiritual being, such as angels, demons and ghosts. 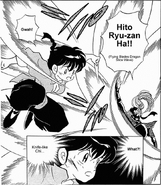 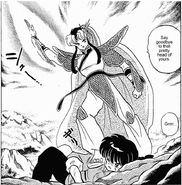 ...he can also concentrate his ki into a sword on his arm.

...and by focusing the power of his Over Soul to increase the size of his spiritual blade to gigantic levels, creating his O.S. Spirit of Sword.

Gourry (Slayers) wielding the Gorun Nova, a blade of light created from willpower energy, allowing it to affect both physical and astral sides.

Kazuma Kuwabara (Yu Yu Hakusho) can form his Spirit Sword by channeling his Spirit Energy into his hands. He is quite versatile with the sword, able to to change its size and length, create two Spirit Swords, and even project in in the form of deadly shards....

...using the Trial Sword to enhance his control over his Spirit Sword, allows him to change its shape into a bending whip or flyswatter...

...and increasing the spirit energy in his Spirit Sword to transform it into the mighty Dimension Sword, which can cut through dimensional barriers.

Shishiwakamaru (Yu Yu Hakusho) wielding the Trial Sword, which mutated into the Banshee Shriek Sword due to his Demon Energy, and contains various deadly spirit abilities.
Add a photo to this gallery

Raziel (Legacy of Kain) wielding the Wraith Blade, a soul-consuming spiritual blade, and the spectral counterpart to the Soul Reaver.
Add a photo to this gallery
Retrieved from "https://powerlisting.fandom.com/wiki/Spiritual_Blade_Construction?oldid=1647386"
Community content is available under CC-BY-SA unless otherwise noted.