Being blessed by the Fire God Kagutsuchi and the host of the Vermilion Bird, Suzaku Himejima (Highschool DxD) has immense fire based spiritual powers.

The user can create, shape and manipulate fire formed from one's soul/spirit. Due to being comprised of spiritual power, these flames aren't only stronger than usual flames, but also have the power to affect one's soul in varying ways.

Genryūsai Shigekuni Yamamoto (Bleach) is a very powerful Shinigami with the power to create and control fire with enough power to burn the entire world. 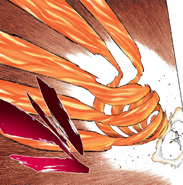 Sternritter "H" - "The Heat" Bazz-B (Bleach) can generate spiritual flames strong enough to counter those of Yamamoto to a certain degree.

Dark Danny (Danny Phantom) can create powerful torrents of green ghost fire that can break through the ground.

As a Himejima descendant, Tobio Ikuse (Highschool DxD) can manipulate spiritual flames after Suzaku awakened his latent spiritual powers in a Shinto ritual.

Bonfire (Valkyrie Crusade) is a spirit that controls spiritual phantasmal flames.
Add a photo to this gallery
Retrieved from "https://powerlisting.fandom.com/wiki/Spiritual_Flame_Manipulation?oldid=1514610"
Community content is available under CC-BY-SA unless otherwise noted.