As a Primera (1st) Espada, Coyote Starrk (Bleach) has an immense spiritual power.

Manipulate the energy of souls.

User can create, shape and manipulate their own or others' spiritual power, which is generated by every sentient being that possesses a soul, or in places with powerful spiritual influence. They can convert it into various forms of energy, manifest it into solid form, or merge into existing objects. 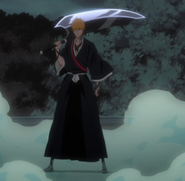 ... which he can release in the form of energetic pressure known as Reiatsu...

... or channel it into his Zangetsu as Getsuga Tenshō technique.

Kenpachi Zaraki's (Bleach) possesses monstrous levels Reiryoku, even by captain's standards, to the point where he has poor control over it and can destroy an entire area in single strike.

Kikyo (InuYasha) was as a priestess of immense spiritual power, able to erect powerful spiritual barriers, and perform several mystic spells or enchantments, as well as purification.

Monks (Diablo) powers are based on Spirit.

Shamans like Yoh Asakura (Shaman King) are capable of use his spiritual power or Furyoku to take advantage of a spirit Reiryoku to perform various techniques like Over Soul.

Rose (Street Fighter) is a master of Soul Power.

Argent Energy (Doom) is a form of spiritual energy used by Demons with metaphysical properties.

Brook (One Piece) unleashing the power of his soul.
Add a photo to this gallery
Retrieved from "https://powerlisting.fandom.com/wiki/Spiritual_Force_Manipulation?oldid=1334979"
Community content is available under CC-BY-SA unless otherwise noted.