Meditation under a waterfall admist the tranquillity of nature

Use spiritual training to be in sync with the body, mind, heart, and soul.

"Meditation clears and focused the mind, heals the body and strengthen the spirit. Through meditation, we enhanced our awareness and gained inner peace. It is meditation that allows us to control chi, the essential life force of the universe that exist in all things."
― Ryu Hayabusa (Ninja Gaiden)

"All living creatures can only feel the energy of nature by ceasing physical motion and mental instincts, focusing on harmonizing the mind with the flow of nature and absorb its power into our bodies."
― Fukasaku describing Senjutsu meditation (Naruto)

The ability to train one's mind to induce a mode of consciousness in order to realize some benefit.

User can enter or has achieved oneness with their spiritual essence as well their mind, making them able to develop a high-level consciousness over bodily processes, as well as reduce stress and pain on the body. The user is able to manifest and develop new abilities as well as enhance their current ones. One is also able to detach oneself from worldly concerns, achieve spiritual enlightenment, and gain control of all of their abilities.

Tien Shinhan (Dragon Ball) meditates in order to use and control the Evil Sealing Wave.

Son Goku (Dragon Ball series) meditates to become "as still as the sky, but as quick as lightning." 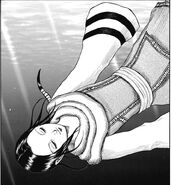 After surviving her vicious duel with Hou Ken and nearly dying after saving Ri Shin's life with a forbidden Shiyuu technique, Kyou Kai (Kingdom) regularly mediated in order to rebuild and repair her damaged chi pathways and body's meridian system.

Toki (Fist of the North Star)

Naruto Uzumaki (Naruto) underwent Senjutsu meditation to harness the energy of nature itself and infused it into his body.

Hagoromo Ootsutsuki (Naruto) had practiced Meditation since youth to master Senjutsu and in his later years for spiritual development.

To hone his mind and spirit as apart of his kenjutsu training, Roronoa Zoro (One Piece) is adept in Zen Meditation gaining strong spiritual abilities ranging from…

…awakened the "Breath of all Things", a Wano concept, which allows him to control his sword's cutting prowess…

…and generate the aura of various mythical beings and animals in his attacks, the most notable being the six-armed and three-headed Asura.

Most Pokemon such as Meditite (Pokémon) are able to meditate in order to awaken their true power and increase their attack status.

Aang (Avatar: The Last Airbender) meditating in order to make contact with the Spirit World.

Gwen Tennyson (Ben 10 series) meditating while using her Mana in order to perform astral projection, telepathy, and be in balance with the cosmos.

... including mastering the most advanced meditation of Tummo, meditating on ice bare without flinching.

To cope with the desolation and boredom in prison, Bane (DC Comics) became a self taught master of meditation, being able to entered a tate of mental hibernation that could last for years.

...and later practices Torquasm-Rao, a Kryptonian meditation technique that allows him to tap into his instincts and astral project.

With herself stating it, Raven (Teen Titans) has to meditate every day to keep her powers and emotions in check.

Kenen Kong/New Super-Man (DC Comics) can use his meditative abilities to bridge the realms of six paths to the physical plane.

Through meditation, the Turtles (Teenage Mutant Ninja Turtles) are able to contact Splinter.

Master Yao's (Kung Fu Panda: Legends of Awesomeness) contained secrets of kung fu that could be used for wrongdoing, Yao eventually took up a lifetime of meditation alone with no contact to the outside world, and soon became known as the keeper of the Five Mystic Kung Fu Secrets.

Iron Fist (Marvel Cinematic Universe) is a meditation expert who replenishes his life force and calms his mind with meditation.

Dragon Lotus (Kaiju Combat) like the Meditation Monsters can become stronger with meditation.

With his Meditate ability, Master Yi (League of Legends) can heal from any damage.

Ryu Hayabusa (Ninja Gaiden) is a master of meditation, he practices intense meditation to attain a strong connection to mystical arts such as Ninpo.

The Panda King (Sly Cooper series) is able to place himself in meditative hibernation for an extensive period of time without the need for food, water, or sleep. 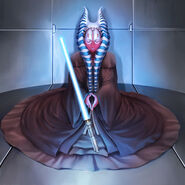 Various Jedi Masters (Star Wars) such as Shaak Ti participate in multiple forms of meditation in order to gain a better connection to The Force as well as to control their emotions.

Bastila Shan (Star Wars: The Old Republic) using Battle Meditation, a Force ability that considerably boosted the morale, stamina, and overall battle prowess of an individual's allies while simultaneously reducing the opposition's combat-effectiveness by eroding their will to fight.

The Scientific Power of Meditation