King Achille (Maximo: Ghost to Glory) utilizes technology mixed with his magic to siphon souls of the afterlife into himself.

Use a combination of spirits and technology.

User can combine technology with the forces of spirits, spiritual phenomena and/or souls.

The Fenton Family (Danny Phantom) are among the wide variety of individuals who utilize ectoplasm to power much of their technologies. 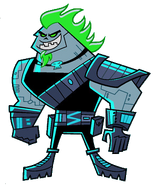 Kisuke Urahara (Bleach) is a master inventor of Soul- and Spiritual-based technology.

The Nephilim (Darksiders) are a race of advanced ancient beings who could fabricate most any kind of technology imaginable. Even magical munitions that could adapt and evolve on the fly.

The Army of Zin (Maximo vs The Army of Zin) are deadly clockwerk automatons powered by the souls of the living and the dead.
Add a photo to this gallery
Retrieved from "https://powerlisting.fandom.com/wiki/Spiritual_Technology?oldid=1309606"
Community content is available under CC-BY-SA unless otherwise noted.