Tira (Soulcalibur) can randomly switch between two fighting styles throughout the battle by changing between her Gloomy and Jolly personality.

"Light and shadow, what's inside and what's out. You could probably call it two separate lives. But you take advantage of that secret and have an unyielding personality, which has earned you nothing but victories."
― A fortune teller to Vinegar Doppio (JoJo's Bizarre Adventure Part V/5: Golden Wind/Vento Aureo)

"So you're not a hero. You're me. You're a force. Lindy was right. You're part of something bigger than both of us. You are God. ... You want to do something? You want to have an impact? Allow me. I've done it before. And something good always came out of it in the long run. Yes, sure. It's a messy thing. It's God's way."
― The Void to Robert Reynolds/Sentry (Marvel Comics)
The ability to utilize one's multiple personalities in combat.

…he swaps full control over to Diavolo, the brutal mob boss of Passione.

When taken over by Hakuba, Cavendish (One Piece) becomes extremely dangerous, slaying both enemies...

...and allies with ruthless skill and brutality.

Shinobu Sensui (Yu Yu Hakusho) is aided in combat by his seven different personalities and was able to master Sacred Energy thanks to them.

When her bookkeeper, Lori casts the spell Zeruku, Kolulu's (Zatch Bell!) alternate and more vicious personality comes out and brutally slashes the enemy. 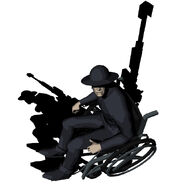 Harman Smith (Killer7) is an assassin capable of using 7 different personalities to realize his assignments.
Add a photo to this gallery
Retrieved from "https://powerlisting.fandom.com/wiki/Split_Personality_Combat?oldid=1514619"
Community content is available under CC-BY-SA unless otherwise noted.