Use the traits of sports equipment.

The power to use the abilities of sports equipment. Variation of Inanimate Object Physiology.

User with this ability either is or can transform into sport equipment, including (but not limited to) the various sort of balls involved, bats, mitts, uniforms, electronic equipment and even entire facilities where sports are played. They could literally be made up of these physical objects, or can simply be made from abstract concepts of the sport. 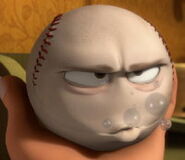 Stats (Foster's Home for Imaginary Friends) is an imaginary friend that resembles and operates like a scoreboard.
Add a photo to this gallery
Retrieved from "https://powerlisting.fandom.com/wiki/Sport_Equipment_Physiology?oldid=1508299"
Community content is available under CC-BY-SA unless otherwise noted.