The Songbird (Bioshock Infinite) is a giant, bird like cyborg creature built from the steampunk technology available in Columbia.

Have a steampunk body.

The power to become a steampunk mechanism. Fictional variation of Bionic Physiology.

User can become or already possesses a physiology based on steampunk: a fictional form of technology and/or aesthetic designs inspired by 19th-century industrial steam-powered machinery. Abilities vary from user to user, as some may utilize different designs from others.

Some may be reliant on simple elements from coal to water to function, requiring them to 'recharge' or else they will become inactive. Some may use batteries or other such power supplies to set the mechanisms in their physiology into motion. Powerful users may utilize perpetual motion as a power source, running forever unless affected by a external force, storingb the unused kinetic energy for a later purpose, assuming they have a method to do it. 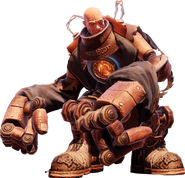 The Handymen (Bioshock Infinite) are citizens of Columbia whose bodies where permanently grafted with bulky steampunk technology to prolong their lives and increase their capabilities. 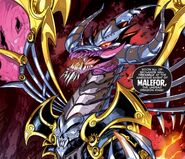 After his battle with the sorceress Hex, Malefor (Skylanders) lost most of his body, his lost limbs are replaced by a powerful steampunk armor. 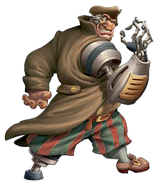 B.E.N. (Treasure Planet)
Add a photo to this gallery
Retrieved from "https://powerlisting.fandom.com/wiki/Steampunk_Physiology?oldid=1508352"
Community content is available under CC-BY-SA unless otherwise noted.