User can create, shape and manipulate stellar energy generated by nuclear reactions in the star's interior, which in turn is balanced by the outflow of energy coming from the surface or a star. 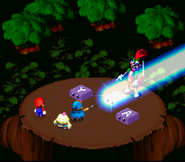 Geno (Super Mario RPG: Legend of the Seven Stars) can manipulate and project stellar energy in various ways, such as through his Geno Beam.

The Nova Corps (Marvel Comics) can manipulate and project stellar and cosmological force through their helmets for various purposes.
Add a photo to this gallery
Retrieved from "https://powerlisting.fandom.com/wiki/Stellar_Energy_Manipulation?oldid=1576501"
Community content is available under CC-BY-SA unless otherwise noted.