Storm (Marvel Comics) can conjure any weather effect she chooses.

The ability to generate storms. Sub-power to Storm Manipulation. Variation of Weather Generation.

Under Lucifer's orders, Death (Supernatural) created a storm powerful enough to wipe out the city of Chicago.

Charlotte Linlin/Big Mom (One Piece) can use her personal homies, Prometheus and Zeus...

...to create a tremendous storm as a manifestation of her rage.

The Demon King's Longsword (Solo Leveling) can summon an endless lightning storm with its Storm of the White Flames effect.

Upon her arrival in Atlas, Salem (RWBY) created a large storm to mask her fleet of Grimm. 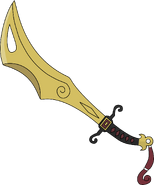 Sword of the Storm (Xiaolin Showdown)

SCP-236 The Perfect Parade Against a Non-existent Threat (SCP foundation) constantly generates a storm around it
Add a photo to this gallery
Retrieved from "https://powerlisting.fandom.com/wiki/Storm_Generation?oldid=1697586"
Community content is available under CC-BY-SA unless otherwise noted.