"Techniques without power are useless. Even if you have the knowledge of a thousand fighting techniques, if you do not have the strength necessary to execute them, you just as powerless as a brittle fly."
― Sairaorg Bael (Highschool DxD)

The power to infuse strength with physical combat. Variation of Combat Merging.

The user can mix physical strength with close-quarters combat, giving their attacks great force which can potentially cripple, maim, and kill their opponents.

Sōsuke Aizen's (Bleach) tremendous strength combined with his sword-skill allows him to slice through Shikai and Bankai with ease.

After mutating his left arm, Fused Zamasu (Dragon Ball Super) created his own fighting style, Divine Hammer, to make full use of his massive arm and strength.

Broly (Dragon Ball Super) makes heavy use of his brute strength and size in combat.

Charlotte Linlin/Big Mom (One Piece) makes full use of her titanic strength, using brute force to destroy anything in her path...

...showcasing her monstrous strength during a fight with Kaido.

…the aftershock of its impact completely devastates the land of Dressrossa.

...later incorporating it while wielding his podao...

Like his Qin rival Ri Shin, Kou Yoku of the Thunder (Kingdom) frequently Infuses his own monstrous strength with his Swordsmanship,...

Might Guy (Naruto) using the Night Guy technique, a kick so strong that it distorts space.

Raoh, Ken-Oh/King of Fists's (Fist of the North Star) Gō no Ken style of the Hokuto Shin Ken focuses on overpowering opponents with nothing but sheer, immense and destructive power.

Younger Toguro (Yu Yu Hakusho) made heavy use of his physical strength during combat.
Add a photo to this gallery

The Hulk (Marvel Comics) has fought numerous beings, creatures, entities with nothing but his limitless strength...

...having repeatedly beaten his rival, the Thing in terms of strength and prowess...

...overpower and defeat some of the strongest mutants in the world like Colossus...

...going toe to toe with Cain Marko, the Unstoppable Juggernaut, one of the strongest beings in the universe.

While untrained in combat, The Sentry (Marvel Comics) makes heavy use of his superhuman strength as created a sonic boom just by punching Ultron Janet...

...and sent Ares, a God of War, flying with one punch. 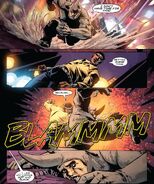 Jack Hawksmoor (Wildstorm/DC Comics)
Add a photo to this gallery 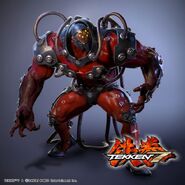 SUPERMAN vs. Mongul (FULL FIGHT!)
Add a photo to this gallery
Retrieved from "https://powerlisting.fandom.com/wiki/Strength_Combat?oldid=1777697"
Community content is available under CC-BY-SA unless otherwise noted.