Tabuu (Super Smash Bros. Brawl) is the embodiment of subspace, as such he can manipulate it any way he wants.

User can create, shape and manipulate subspace — a dimensional space exists as part of the normal 3rd dimensional space. In general, this refers to the 11th dimension, but more specifically, it can be a pocket dimension created by the user, which is loosely connected to the normal world.

Normal Spatial Manipulation controls the normal subspace to certain levels, mainly to use this "inside space" to link two points of 3rd dimensional space together for portals and spatial movements. This ability differs in that it controls the "inside space" alone, as a Personal Domain; this allows them to control the goings-on inside the dimension, but cannot affect normal space outside.

Unlike Space-Time Manipulation, the user does not have access to the fourth dimension (time), and therefore, cannot travel through time.

Kagerōza Inaba (Bleach) using Raikū to control the Dangai subspace, allowing him to displace and replicate space as well.

Ōko Yushima (Bleach) using Sumitsukigasa to control the Dangai subspace, allowing him to displace and replicate space as well. 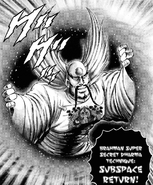 Kaguya Ōtsutsuki (Naruto) using Amenominaka to instantaneously teleport Team 7, Obito and herself to any of her six personal subspace dimensions...

...and uses Yomotsu Hirasaka to tear open the fabrics of space of her personal subspace dimension so she can travel anywhere,...

Palkia (Pokémon Adventures) using Subspace Tear to tear open the fabrics of space, leaving a dimensional line that leads to another location in space.

Tabuu (Super Smash Bros. Brawl) is the embodiment of Subspace, which is why he cannot leave to the third dimension.
Add a photo to this gallery
Retrieved from "https://powerlisting.fandom.com/wiki/Subspace_Manipulation?oldid=1353445"
Community content is available under CC-BY-SA unless otherwise noted.