"Ooh! Morlocks. C.H.U.D.'s. Mole People!"
"There is no escape from the fortress of the moles! Oh, except that."
― Homer Simpson and Hans Moleman as the Mole King (The Simpsons)

The power to adapt to underground environments. Variation of Environmental Adaptation.

User is able to survive and adapt to underground, stuffy, low-light terrene conditions like caves/tunnels with senses, endurance and breathing adapted for such (perhaps also adapted for intense heat, if adapted for areas closer to the earth's core). 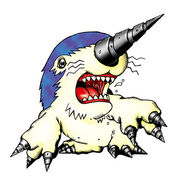