Afterlife (Marvel Comics) was an altruistic Angel who could absorb the pain and suffering from human souls.

The ability to absorb pain/suffering and utilize it in some way. Sub-power of Emotion Absorption and Pain Manipulation. Variation of Absorption.

The user can absorb pain/suffering (whether mental and physical) of others, while removing it from the source, into their body and use it in various ways, gaining some form of advantage, either by enhancing themselves, gaining the drained power, using it as power source etc., either temporarily or permanently.

Castiel (Supernatural) absorbs Sam Winchester's mental suffering, saving him but resulting in his own insanity. 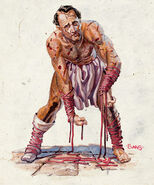