Since Operation Dark Storm, the nanites (The Matrix) have kept sunlight from reaching the Earth's surface.

Block the sun in the sky

"Ever since the beginning of time, man has yearned to destroy the sun. I shall do the next best thing: block it out!"
― Charles Montgomery Burns (The Simpsons)

The power to block out sunlight from the sun. Sub-power of Eternal Night Inducement. Technique of Solar Manipulation. Opposite to Moon Blocking.

The user can block the sun in the sky through different methods, including darkening the sky, placing an object high in the sky that blocks the sun, creating dark clouds to block the sun, causing eclipse, etc., preventing sunlight coming down, which will kill plants over time and prevent solar-powered beings from getting their power. 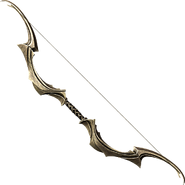 While normally a divine weapon that harnesses the power of the sun, Auriel's Bow (Elder Scrolls) can be corrupted with the blood of a female Vampire Lord, causing its arrows to block the sun for an entire day.

Using the talismans of the slain Ra-Tet, the Beast (Angel) cast a spell that eclipsed the sun...

...beginning as a sunlight-blocking spot that covered Los Angeles and would eventually cover the totality of Earth. 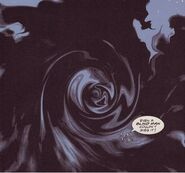 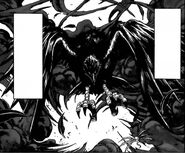 The Boss of the Skies (Toriko) can completely block out the light of the sun wherever it flies.

The Boogie Man (The Powerpuff Girls)...

...use a giant disco ball to blocking the sun.

As part of his diabolical plan to obtain infinite power and energy, Mr. Burns (The Simpson) created the Sun Blocker to literally mask the sun creating a permanent twilight.

Egg Moon (Sonic X), a semi-artificial moon created by Doctor Eggman to repair the damage done to Earth's moon by the Eclipse Cannon to control the Earth's moon to block the sun.

Remilia Scarlet (Touhou Koumakyou - the Embodiment of Scarlet Devil) generated a mist over Gensokyo to block out the Sun.
Community content is available under CC-BY-SA unless otherwise noted.