Electro (Marvel Comics) is capable increasing his electrical power whenever he is enraged.

Increase one's self electricity through an intense emotional state.

The ability to amplify one's self electrical output and strength through intense emotions. Technique of Electricity Manipulation.

The user of this ability can increase the power of their electrical energy by becoming extremely angry, thereby releasing currents of electricity through the body and increasing their strength. The process is similar to the Fight or Flight Response. This intense state of emotion may even change the user's appearance.

Mecha-Baz (Kaiju Combat) can recharge his energy with electrical energy. 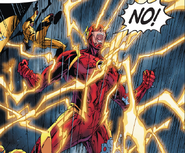 The Flash (DC Comics) can "Super Charge" lightning from his body when angered. 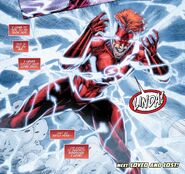 Wally West (DC Comics) generates large amounts of electricity when angered.
Add a photo to this gallery
Retrieved from "https://powerlisting.fandom.com/wiki/Super_Charge?oldid=1625709"
Community content is available under CC-BY-SA unless otherwise noted.