Mother of Champions (DC Comics) is able to conceive and gestate children at superhuman speeds and can give birth up to twenty-five identical super-soldiers in three days.

Conceive/gestate at an unnaturally high rate.

"Well your garden variety penguin lays one egg a year. Since the spill our penguins have been laying six eggs every 15 minutes. Also, the eggs hatch in only 12 hours. Also, the "males" are laying eggs."
― Free Waterfall Sr. (Futurama)

"How much family you think you've got?"
― Duane Williams (Craig of the Creek)

The ability to conceive and gestate children at an unnaturally high rate.

The user can conceive and produce offspring at an unnaturally high rate and/or give birth to scores of children in a short amount of time, far above the rate of normal reproductive abilities of their species or their body's normal ability to sustain.

Alternatively, the user may be of a member of a species that naturally reproduces much faster than humans. 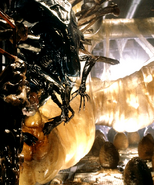 Xenomorph Queens (Aliens/Alien vs. Predator) can lay numerous eggs in a short amount of time.

The Tainted Coil (Brütal Legend) is an empire of demons that can reproduce on the battle-field, spawning fully-grown, fully-trained infantries in a matter of moments. 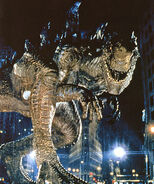 Zilla (Godzilla) was able to lay up to 200 eggs via Asexual Reproduction.

Karen Gallagher (Smallville) conceived her son Evan and carried him to full term within a week.

Truly living up to her title of Big Mom, Charlotte Linlin (One Piece) has conceived a total of 85 children within 42 years.

Megakaryocyte (Cells At Work!) is the sole progenitor of all the body's Platelets as well as the Platelet Division, which she does by actually giving birth to them, unlike the other bodies cells which are made by either stem cells or cellular cloning chambers.

Krogan (Mass Effect) possess such a high birth rate that the genophage was released to prevent them from overrunning the galaxy.

Broodmothers (Dragon Age) can give birth to hundreds of Darkspawns at the same time.
Add a photo to this gallery
Retrieved from "https://powerlisting.fandom.com/wiki/Super_Fecundity?oldid=1525232"
Community content is available under CC-BY-SA unless otherwise noted.