Juniper "June" Kim Lee (The Life & Times of Juniper Lee), following her stomach ache, became the Te Xuan Ze, being bestowed not only superpowers, but Magic as well.

Be a human with both magic and superpowers.

The user is a human that possesses both superpowers and magic abilities. In regards to having powers via genetic engineering, birth, evolution, training to gain superpowers and magic, and having bestowed powers from supernatural beings, they are still technically human without their physiology being or almost altered, much like metahumans do.

The user may have:

Magic that users may possess, but are not limited to:

Forge (Marvel Comics) has the supernatural Intuitive Aptitude and is a master at using his tribe's Shamanism. 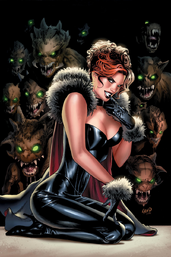 As a clone of Jean Grey, Madelyne Pryor (Marvel Comics) inherited her Telepathy and Telekinesis, and is a practitioner of black magic.

Ever since her birth, Meggan Puceanu (Marvel Comics) wielded an arsenal of powers that included Magician and Mutant/Homo Superior traits.

Santa Claus (Marvel Comics), who is the most iconic individual of Christmas, has both super and magical powers.

June Moone/Enchantress (DC Comics)
Add a photo to this gallery