Alternatively, the user is a member of a certain group of subjects such as Superior Human Physiology|homo superior]], who was vampirized, giving them vampiric powers in addition to their pre-existing power sets. They could also be vampires that have been empowered through rational or irrational means.

Metavampires of this category gain their powers via evolution, birth, genetic engineering, or exposure to radiation or biohazardous substances, like mutagens, or any other methods that involve genetic experimentation in that regard.

In one way or another, certain metavampires that are of this classification might have minor physical changes, like their irises changing to any color like a fiery shade of red, yellow, purple, etc, retractable claws or spikes, the color of the skin being changed, among others. In fact, these kinds of supervampire will be able to possess powers without their physiology being altered.

By this category metavampires gain their powers by having their abilities bestowed upon them by supernatural beings, enchantment, training to self-bestow their powers like Telekinesis for example, being blessed or granted wishes to obtain their powers, and among many other methods without any genetic tinkering. 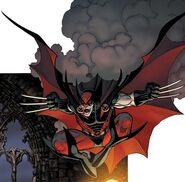 Earth-2010 (Marvel Comics) is an alternate universe where all of humanity was transformed into vampires, including all the world's superheroes and supervillains.

Raymond Connor (Ultimate Marvel) developed similar powers to Matt Murdock's after being blinded in an accident, leading Stick to training him to take over the mantle of Daredevil and join him in his war against vampires,...

Augustine Vampires (The Vampire Diaries) are vampires that have been micromutated by the Ripper Compound, giving them enhanced powers and a cannibalistic taste for other vampires' blood.
Add a photo to this gallery
Retrieved from "https://powerlisting.fandom.com/wiki/Superior_Vampire_Physiology?oldid=1521626"
Community content is available under CC-BY-SA unless otherwise noted.