Cole MacGrath (inFAMOUS Series) was turned into a vampire by Bloody Mary, essentially making him a vampire/conduit hybrid.

Take the form of a modified/evolved vampire.

The power to take the form of a modified/evolved vampire. Variation of Modified Physiology and Vampire Physiology.

The user is a vampire that has been modified or evolved due to a variety of causes, such as evolution, genetic experiments, mutation, enchantment, having powers bestowed upon them by other beings or sources, through birth, and training in order to obtain said powers.

Alternatively, the user is a member of species such as homo superior, who was vampirized, giving them vampiric powers in addition to their pre-existing power sets.

Modified Vampires can also be divided into two categories:

In one way or another, certain Homo Superiors that are of this classification will may have minor physical changes without their humanity being fully or almost slipped away, like their irises changing to any color like a fiery shade of red, yellow, purple, etc, retractable claws or spikes, color of the skin being changed, among others. In fact, these kinds of Supervampires will be able to possess powers without their physiology being altered.

Non-Scientific Metavampires gain their powers whether they have abilities bestowed upon them by supernatural beings, enchantment, training to bestow powers like Telekinesis for example, being blessed or granted wishes to obtain powers, and among any other methods without any genetic tinkering. Unlike scientific-based Supervampires this category of Metavampires wouldn't have to be able to suffer mutations and instability of their DNA, which can be caused in various ways. Just because Supervampires are of this category, doesn't necessarily mean they are any weaker than scientific-based Metavampires. 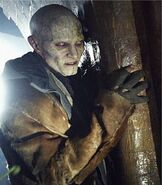 Despite having become a vampire, Ringo (Boktai) retains the blood of a solar child in his veins, allowing him to wield the Gun del Sol.

Ororo Munroe/Bloodstorm (Marvel Comics) is an alternate reality version of Storm who was turned into a vampire by Dracula.

Jacqueline Falsworth/Spitfire's (Marvel Comics) mutant power of super speed first manifested through a combination of being bitten by the vampire Baron Blood and being transfused with the artificial blood of the synthezoid Jim Hammond, making her the first known mutant-vampire hybrid. 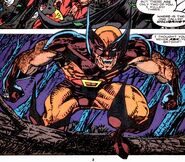 The James Howlett/Wolverine of Earth-9140 (Marvel Comics) is an alternate version of Wolverine who was killed and resurrected as a vampire by Dracula with the rest of the X-Men. However, Wolverine's will was too strong for Dracula's hypnotism and he killed him, becoming Lord of the Vampires.

The X-Vampires (Marvels Comics) are an alternate reality version of the X-Men who were killed and resurrected by Dracula to serve as his vampiric servants until he was killed and replaced as Lord of the Vampires by Wolverine.

Augustine Vampires (The Vampire Diaries) are vampires that have been modified with the Ripper Compound, giving them enhanced powers and a cannibalistic taste for other vampires' blood.
Add a photo to this gallery
Retrieved from "https://powerlisting.fandom.com/wiki/Superior_Vampire_Physiology?oldid=1198184"
Community content is available under CC-BY-SA unless otherwise noted.