Nemesis Kid (DC Comics) defeats his opponent by becoming physically superior to them.

become superior to an opponent

"I made it by being tougher than the toughies and smarter than the smarties!"
― Scrooge Mcduck (Ducktales)

"It took you a lifetime to gain your power - and me only seconds to acquire and better it."
― Hart Druiter/Nemesis Kid to Val Armorr/Karate Kid (DC Comics)

"Your superior to me in every way!"
― Homer Simpson (The Simpsons)

"You may be made of fire, but my magma burns even hotter than that!"
― Akainu to Portgas D. Ace (One Piece)

The power to become superior to an opponent. Sub-power of Superior Adaptation.

The Hive (Destiny) can follow the "Killing Logic" which dictates that whatever the Hive kills they are superior to them. 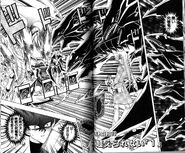 The Wicked Avatar (Yugioh) is 1 ATK higher than any other monster it copies, guaranteeing that it will overpower anyone else.

Sakazuki aka Akainu (One Piece) was able to overpower Portgas D. Ace due to the superiority of his Magu Magu no Mi/Mag-Mag Fruit over Ace's Mera Mera no Mi/Flame-Flame Fruit.
Community content is available under CC-BY-SA unless otherwise noted.