Have better accuracy than naturally possible.

The ability to have drastically better accuracy than what is naturally possible. Sub-power of Supernatural Body. Advanced version of Enhanced Accuracy.

Users have glaringly, obviously and super/unnaturally greater accuracy than other beings in their universe because their capabilities are pushed beyond the natural level, making them able to aim and target much better than regular beings (in that verse).

Sharpshooter (Valkyrie Crusade) is an Ace Sniper with superhuman accuracy.

Archer (Fate/Stay Night) is able to precisely snipe even enemies moving at high speeds as long as they are within a 4km range.

Saitama (One Punch Man) can flawlessly and effortlessly pinpoint the location and distance of even the fastest objects in existence.

Vander Decken (One Piece) can imbue any weapons he throws with his Mark-Mark Devil Fruit/Mato Mato no Mi powers, allowing him to strike his targets from tremendous distances. 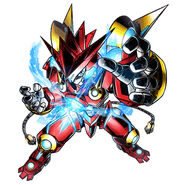 Super Buu (Dragon Ball Z) was able to shoot down every remaining human with lethal accuracy from the Lookout, with only Tenshinhan and Chaozu being able to avoid and Satan and Bee purposely spared.

Peter Parker/Spider-Man (Marvel Comics) has perfect aim, as his web-shooters and spider-tracers never miss at anyway, even if he's not looking or if is blind.

Jason Voorhees (Friday the 13th)
Add a photo to this gallery
Retrieved from "https://powerlisting.fandom.com/wiki/Supernatural_Accuracy?oldid=1537619"
Community content is available under CC-BY-SA unless otherwise noted.