The ability to be drastically more agile than what is naturally possible. Sub-power of Supernatural Body. Advanced version of Enhanced Agility.

Users are glaringly, obviously and super/unnaturally more agile than other beings in their universe because their capabilities are pushed beyond the natural level; making them immensely more agile and able to combine their balance, bodily coordination, speed, reflexes, strength, and endurance better than regular beings (in that verse). 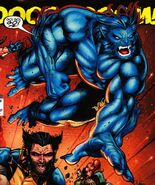 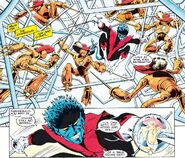 Venom (Marvel Comics) copied Spider-Man's powers, including his agility, when the Venom symbiote was bonded to him. These powers were passed down to the symbiotes's progeny; ...

Nicholas St. North/Santa Claus (Rise of the Guardians) hopping around rooftops like a pro.

Bree Davenport (Lab Rats)
Add a photo to this gallery
Retrieved from "https://powerlisting.fandom.com/wiki/Supernatural_Agility?oldid=1630342"
Community content is available under CC-BY-SA unless otherwise noted.