Have a supernatural Chest.

The user has a supernatural chest anatomy which naturally imbued their thorax with supernatural advancements that can grant abilities, powers and even protection. Due to the supernatural advancement of the thorax all fundamental structures/functions and natural aspects also gain supernatural properties to better develop their upper chest area (their heart, upper muscles, thoracic skeleton, female breasts, male pecs, etc,) to enhance the user’s fundamental qualities which they can use for various purposes.

With Cosmo (Fairly Odd Parents) being a fairy and gaining a more buffed status he fought Crocker and deflected his magic attacks with his pecs because he too is a magical being.

Megaera (God of War) can contain many parasitic insects, in her body and can spore out of her chest...

... which she uses to infect the Hecatonchires. 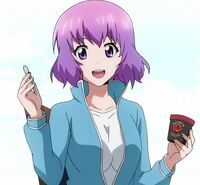 Chifusa's (Manyuu Hikenchou) chest can absorb the Breast Energy of other women's when she uses the Breast Flow technique on them causing her own to enlarge and become increasingly sensitive and supple, while others women's shrink.

As a Slime, Suu's (Monster Musume) breasts have supernatural properties that make them grow in size depending on how much water she has absorbed and healing abilities which she used on Kimihito to help heal his cold.

Sara (MisFits) can involuntary use her hypnotic chest on any men.

Melona (Queen's Blade) is a "slime swamp witch" with various powers and regenerative properties infused within her chest with projectile combat and healing purposes. 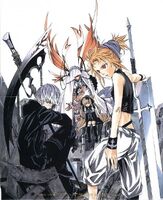 Maria (Seikon No Qwaser) are known for their "soma", a mystical substance found in their breastmilk that empowers all Qwaser to manipulate periodic elements for battle. 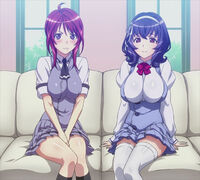 ...Tomo however has proven to be a far more powerful Maria, due to having more potent Soma than most and having a bigger chest that she can use to her advantage for herself.

Miyuri Tsujidô (Seikon No Qwaser) releases a powerful energy blast from her chest, obliterating anything in her path.

Mammon (Seven Mortal Sins) can produce breast milk that has hypnotic and illusionary properties and that she uses to her advantage.

Raven Hex (Tarot: Witch of the Black Rose) can channel her magic through her chest to create powerful blast.

Tarot (Tarot: Witch of the Black Rose) has the same sex magic as her sister Raven Hex, thus having the same potential to use her chest as she does.
Community content is available under CC-BY-SA unless otherwise noted.