Magic Whip (Valkyrie Crusade) uses magic as the principal component of what she cooks, making the foods she make have supernatural/magical properties.

The ability to cook anything with supernatural/magical properties. Combination of Food Manipulation and Supernatural Properties Manipulation. Opposite to Unnatural Cooking. Variation of Cooking Manipulation.

The user can cook almost anything with supernatural/magical properties, allowing the user to cook things such as a pie that grants superpowers, a coffee that heals, candies that are much sweeter than they should be, etc.

…to create food that empowers life. 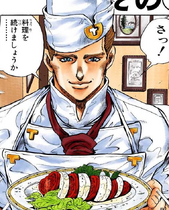 Tonio Trendy/Trussadi (JoJo's Bizarre Adventure Part IV: Diamonds are Unbreakable) infuse his Stand, Pearl/Pole Jam into his food, and increase the healing potency of the dishes to supernatural levels.

The White Knife (Kamen Rider Kabuto) is a holy knife that allows chefs to infused food with purification properties that can counter the powers of the Black Knife.

Froese (Toriko)
Add a photo to this gallery
Retrieved from "https://powerlisting.fandom.com/wiki/Supernatural_Cooking?oldid=1731426"
Community content is available under CC-BY-SA unless otherwise noted.