As the God of the Forges and Metalwork Hephaestus/Vulcan (Greco-Roman Mythology) was the greatest craftsman in all of Olympus, having made legendary artifacts such as the famous weapons of the gods.

User possesses supernatural proficiency in crafting different kinds of items, able to forged supernatural weapons, armors and artifacts with enchanted powers which are normally impossible to create with conventional craftsmanship.

Oetsu Nimaya (Bleach), inventor and the only one who can forge…

…Asauchi, the ultimate Zanpakuto with the ability to evolve in proportionate to the wielder's power and potential.

Dark Knight Sparda (Devil May Cry) is one of the Underworld's greatest craftsmen, having crafted enchanted artifacts and weapons of transcendent power… 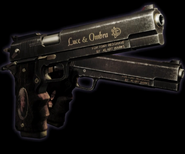 …Yamato, also one of the most powerful Devil Arms can cut through space and even severed the dimensional connection of the Human World and Underworld.

…Rebellion, also one of the most powerful Devil Arms, can slayed even transcendent demon gods.

Totosai (Inuyasha) is a veteran yokai swordsmith who is well known among yokais for his superior skills in creating demon swords with unique powers.

Totosai's ex-apprentice, Kaijinbo (Inuyasha) is also a great yokai swordsmith, however unlike Totosai who relied solely on his skills, Kaijinbo used gruesome methods such as using human blood and yokai souls to strengthen his creations with great and sinister powers.

Hosenki (Inuyasha) is a yokai jewelsmith who created the Black Pearl. 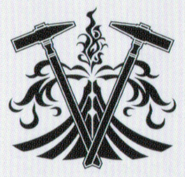 Being blessed by the Goddess of Smithing, the Hephaestus Familia (DanMachi) has supernatural fortitude in craftsmanship and blacksmithing, which enables them to become the finest blacksmiths in the world. 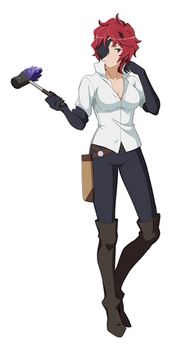 Hephaestus (DanMachi) has supreme craftsmanship skills even for a divine smith, her skills are superior to fellow smithing gods such Goibiniu.

Nico (Devil May Cry) is a technomagical gunsmith, applying alchemy into her craftsmanship to process raw materials of Demons and convert it into powerful weapons.

With more than a century of experience in weapon smithing, Muramasa (Ninja Gaiden) has achieved an abnormal level of perfection in his craftsmanship, able to refine supernatural weapons such as the Dragon Sword, Eclipse Scythe and the Lunar Staff. 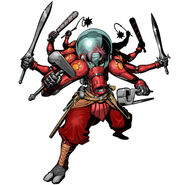 Vulcanusmon' (Digimon) god-like skills in smithing and crafting weapons allow him to instantly create improvised weapons for battle, while his greatest creations are the most powerful weapons in the Digital World.

Aulë (Silmarillion)
Add a photo to this gallery
Retrieved from "https://powerlisting.fandom.com/wiki/Supernatural_Craftsmanship?oldid=1386979"
Community content is available under CC-BY-SA unless otherwise noted.