The power to have bodily fluids with supernatural properties. Sub-power of Supernatural Cells. Variation of Bodily Fluid Manipulation.

The users bodily fluids have supernatural properties, increasing their physiology beyond the regular norm. User can share their bodily fluids with others, serving to vitalize, augment and influence a target's biophysical structure on a cellular and/or genetic level, possibly causing mutations and other effects that may be advantageous or disadvantageous. Ex: users with a specific supernatural fluid, like blood, that bestows increased physical capabilities can share this power via a blood transfusion with others.

Sakra's (Nectar of Dharani) “nectar” provided directly from her mammaries of her race contains divine and mystical properties that can grant incredible strength, but at a price of turning them into a raged driven berserk. 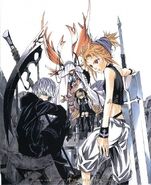 Maria (The Qwaser of Stigmata) are the alter-ego combat partner of a Qwaser whose primary function is to provide soma a mystical substance found in their breastmilk, that empowers all Qwaser to manipulate any of the periodic elements.

Both Wolverine's (Marvel Comics) of the Ultimate universe possess unique biophysical properties to their blood/fluids used for the creation and empowerment of the mutant species.

Mammon (Seven Mortal Sins) breastmilk has hypnotic and illusionary properties.
Add a photo to this gallery
Retrieved from "https://powerlisting.fandom.com/wiki/Supernatural_Fluids?oldid=1484519"
Community content is available under CC-BY-SA unless otherwise noted.