Devil Fruits (One Piece) grant the eater various superhuman physical abilities, the ability to transform into an animal or into an element of nature.

"And I watered it in fears, Night & morning with my tears: And I sunned it with smiles, And with soft deceitful wiles. And it grew both day and night. Till it bore an apple bright."
― V referring to the Qlippoth Tree. (Devil May Cry)

The ability to gain supernatural powers/effects from supernatural fruit. Variation of Powers Via Object. Not to be confused with Digestive Assimilation.

The user of this power can gain supernatural powers through consuming supernatural fruit. The fruits can have either a positive or negative effect which could be permanent or temporary. 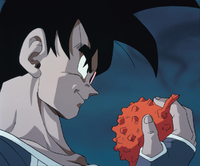 Turles (Dragon Ball Z: The Tree of Might) holding a Fruit of the Gods, which was spawned by the Tree of Might when it absorbed an entire planet's natural energy, granting its eater massive increase in power. 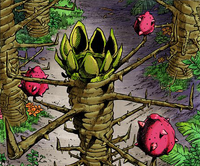 A Rubber Human, Monkey D. Luffy (One Piece) became a "superhuman" or Paramecia class Devil Fruit user after accidentally eating the Gum-Gum Fruit/Gomu Gomu no Mi as a kid.

A Leopard Human, Rob Lucci (One Piece) became an "animalistic" or Zoan class Devil Fruit user after eating the Cat-Cat Fruit/Neko Neko no Mi: Model Leopard.
Add a photo to this gallery

Spawn (Image Comics) ascended into a being equal to God and Satan after eating the Forbidden Fruit from the Garden of Eden.
Add a photo to this gallery 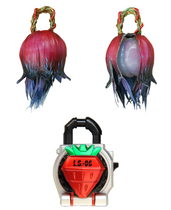 Immature Lockseeds (up) (Kamen Rider Gaim) turns their consumers into Inves at the same time granting them powers. One must wear a Sengoku Driver which ripens them (down) to consume its power safely.
Add a photo to this gallery

Adam and Eve (Biblical Mythology) once ate the Forbidden Fruits which granted the knowledge of good and evil, but with the price of being cursed by the concept of sin in disobeying God and are forever cursed with the knowledge of sin.
Add a photo to this gallery 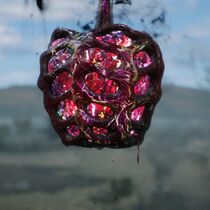 The Qliphoth Fruit (Devil May Cry 5) imbues any demon that consumes it with sovereign power to rule overall... 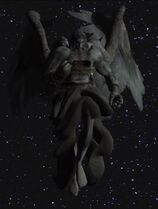 ...granting Mundus enough power to slay the previous ruler of the Demon World and take the throne for himself...

...and allowing Vergil to unlock his Sin Devil Trigger.
Add a photo to this gallery
Retrieved from "https://powerlisting.fandom.com/wiki/Supernatural_Fruit_Empowerment?oldid=1631007"
Community content is available under CC-BY-SA unless otherwise noted.