"So, it begins again...Moving, always moving, never knowing, following impulses...Then they appear. The Monsters, the creatures, pitiful misfits in the schemes of nature. And again I am here...For such is my destiny...the destiny of Ulysses Bloodstone!"
― Ulysses Bloodstone (Marvel Presents #1)

"So, how many times do I have to put you in the ground?"
― Eric Brooks/Blade (Marvel Comics)

The ability to possess the traits and powers of a supernatural hunter. An advanced form of Horror Survivor. Not to be confused with Paranormal Expertise.

Since being marked by the Brand of Sacrifice during the Eclipse, Guts (Berserk) has wandered between the darkness of night and Interstice...

...fighting the unnatural forces that haunt him as they try to kill him...

...and hunts down the Apostles, demonic beings that serve under the God Hand since becoming the Black Swordsman.

Gourmet Hunters (Toriko) have the Gourmet cells to hunt down dangerous and supernatural beasts that no mere human can hunt and takedown.

The Goblin Slayer (Goblin Slayer) is very skilled and highly intelligent in hunting down and killing all kinds of goblins.

Possessing mysterious magical abilities, Hunters (Solo Leveling) are humans who hunt and fight the hostile magic beast found in Dungeons and Instant Dungeons across the world...

...Since his Double Awakening as a Player, Sung Jin-Woo became an extremely powerful hunter...

...with his newly acquired abilities, he can fight and defeat boss level magic beast as he demonstrated with the Giant Arachnid Buryura...

...becoming a deadly opponent against the hostile high-level humanoid races like Ice elves...

...high-level demons...
Add a photo to this gallery 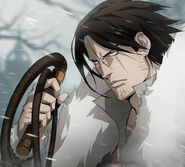 Trevor Belmont (Castlevania), the last of his family...

...has trained for years to fight supernatural beings.

The quintessential final girl, Cassie Hack (Hack/Slash) has made it her life mission to slay the killers of the world after she was traumatized by a Slasher.

Eric Brooks/Blade (Marvel Comics) is commonly known as one of the world's greatest vampire hunters...

Jack Boniface (Valiant Entertainment Comics) latest inheritor of the Shadowman linage, protectors of the world of the living from the unworldly Deadside.

After his mother was killed by them, Jefferson Twilight (The Venture Bros.) dedicated his life to hunting down and killing African American variant of vampires known as Blackulas.
Add a photo to this gallery

A clan of humans who possess the power to see the true form of Wesen, A Grimms (Grimm) is capable...

Sam and Dean Winchester (Supernatural) are hunters who have over the years become demons, gained immunity to direct tracking by angels, etc., abilities that have greatly helped them in protecting humanity from the supernatural and vice versa.
Add a photo to this gallery

The Hunter (Bloodborne) is a hunter bounded and sustained by Hunter's Dream to hunt beasts and Great Ones. The Hunter gains strength from consuming blood echoes and inhuman knowledge.

The second son of the Dark Knight Sparda, Dante (Devil May Cry series) is a professional Devil Hunter dedicated to exterminating evil demons and other malevolent supernatural forces.

Once a Holy Knight in the Order of the Sword, Nero (Devil May Cry series) was granted great skills in combat and weaponry to fight against demons and with his own demonic bloodline helping even more.

Like all Witchers, Geralt of Rivia (The Witcher) is a superhuman monster hunter, who received extreme training since childhood and was augmented beyond ordinary human limits through mutagenetic alchemy.
Add a photo to this gallery

Huntsmen and Huntresses (RWBY) are super-powered and licensed elite warriors who use their "Semblance" skills, custom weapons, the Dusts and Aura to protecting the world from the creatures of Grimm.
Add a photo to this gallery

Dante VS Bayonetta DEATH BATTLE!
Add a photo to this gallery
Retrieved from "https://powerlisting.fandom.com/wiki/Supernatural_Hunter_Physiology?oldid=1560973"
Community content is available under CC-BY-SA unless otherwise noted.