Coluans (DC Comics) like Brainiac 5 are renowned for their uncanny inventive capabilities.

User possesses supernatural proficiency for inventing all sorts different kinds of machines and other technological devices with excellent speed and skill.

Azmuth (Ben 10) is the Galvan's greatest inventor, having invented the Omnitrix and Ascalon Sword. 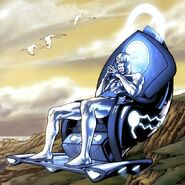 In almost every episode, Schwoz (Henry Danger/Danger Force) has invented various gadgets and equipment that are nearly impossible for a normal man to make to help Captain Man and Kid Danger on missions...

...and invented an A.I. named Haley who turned against Captain Man and the others after detecting Ray was a threat.
Add a photo to this gallery
Retrieved from "https://powerlisting.fandom.com/wiki/Supernatural_Inventing?oldid=1574661"
Community content is available under CC-BY-SA unless otherwise noted.