Possess supernatural reflexes.
The ability to have drastically better reflexes/reaction time than what is naturally possible. Sub-power of Supernatural Condition. Advanced version of Enhanced Reflexes.

Users have glaringly, obviously and super/unnaturally superior reaction speeds over other beings in their universe because their capabilities are pushed beyond the natural level, making them able to react faster than regular beings (in that verse).

As the strongest vampire, Dracula's (Netflix's Castlevania) supreme reflexes allow him to counter his son Alucard's speed and catch him by the face.

With reflexes worthy of his name, Monkey D. Luffy (One Piece) possess incredible reflexes as he dodges the attacks of a Six Powers master like Blueno with ease...

...and after 2 years of training, they have drastically improved thanks to his mastery of Kenbunshoku/Observation Haki. 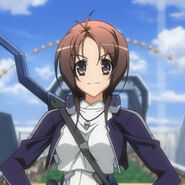 Makiko Oriotori (Horizon In The Middle of Nowhere) has such supernatural reflexes that not only can she avoid getting touched by every single person in class 3-Plum, but she can even dodge homing attacks as well.
Add a photo to this gallery

Fasttrack (Ben 10)
Add a photo to this gallery

Due to Weapon X's experiments, Wade Wilson/Deadpool (Marvel Comics) possesses reflexes boarding on supernatural...
Add a photo to this gallery

Point Man's (F.E.A.R. Series) superior reflexes allow him to enter slow motion, dodging most weapon fire and other attacks.
Add a photo to this gallery
Retrieved from "https://powerlisting.fandom.com/wiki/Supernatural_Reflexes?oldid=1523906"
Community content is available under CC-BY-SA unless otherwise noted.