Hope Pezzini (Witchblade) was born from the union between the hosts of the Darkness and the Witchblade.

The power to supernaturally reproduce.

The user of this can supernaturally procreate other entities; reproducing any common to completely unique beings with supernatural properties and powers that originated from them, having offspring brought forth by using supernatural methods or by natural reproduction with a partner.

Wonder Woman/Diana (DC) being born through the power of the Zeus. 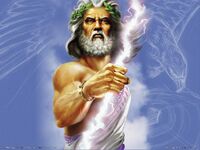 Zeus (Greek Mythology) has been known to breed many deities with gods, mortals and even titans.

In their union, The Darkness and Angelus (Top Cow) are the ones that first sired... 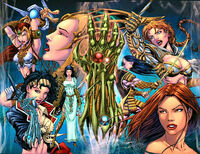 ... The Witchblade, born with light and dark powers to forever maintain the balance between them.

Eve, the Mother of All Monsters (Supernatural) has "birthed" all kinds of monsters from herself with their own powers and traits.

Ego (Marvel Cinematic Universe) has bred and sired many alien children of his own in hopes of any of them carrying his celestial genes...

... a result that his son Peter Quill was only able to gain with all of his fathers powers.

Joanna Bueauchamp (Witches of East End) gives birth to Ingrid and Freya every time they die.
Add a photo to this gallery
Retrieved from "https://powerlisting.fandom.com/wiki/Supernatural_Reproduction?oldid=1724615"
Community content is available under CC-BY-SA unless otherwise noted.