Evolve any superpowers to the ultimate level.

"Bites the Dust was born from my absolute desire to not encounter you... Bring it on!!"
― Yoshikage Kira (JoJo's Bizarre Adventure Part IV: Diamond is Unbreakable)

The ability to greatly strengthen and evolve superpowers and abilities to its absolute ultimate power level. Combination of Power Augmentation, Superpower Manipulation, and Evolution. Opposite to Superpower Devolution.

The user of this power can upgrade or evolve any kind of superpower, including enhancing one's physical and mental condition an unlimited number of times, to virtually any level of gaining new powers or form.

Accelerator's (A Certain Magical Index) vector shield algorithm has been updated to that of a new world, including that of Dark Matter.

Sōsuke Aizen (Bleach) evolved to his ultimate form and attained new powers and abilities far beyond those of Shinigami's and Hollows. 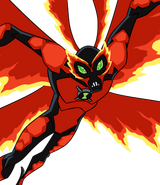 After Sasuke Uchiha (Naruto) obtained the eyes of his brother, Itachi, he was able to evolve his standard Sharingan into the Eternal Mangekyō Sharingan, gaining new powerful ocular abilities.

After taking place in a special ceremony performed by the Elder Kai, Gohan (Dragon Ball) was able to achieve the ultimate power that laid dormant within him to the fullest extent.

Buu (Dragon Ball) can continuously evolve his abilities by absorbing his targets.

Goku Black (Dragon Ball Super) is able to evolve his abilities by fighting his opponents and adapting their fighting styles... 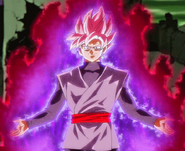 After pushing its power to the limit, Lelouch vi Britannia's (Code Geass) Geass evolved to encompass both of his eyes.

Though initially limited to Power Augmentation, Ando Masahashi (Heroes) eventually evolved his power to allow him to fire energy beams.

Edward's (Heroes) Accelerated Probability has evolved to the point where he can generate electricity. 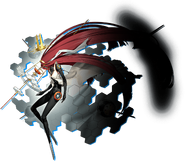 Due to her resolve to help her friends, Rise Kujikawa's (Persona 4) Persona Himiko evolved to become more combat-capable.

Kitty Pryde's (X-Men: Days of Future Past) phasing abilities have evolved to the point that she can phase through space and time, allowing her to send someone's mind to the past or future.

Along with its Stand granting ability, a Stand Arrows (JoJo's Bizarre Adventure) can evolve a user and their Stand's abilities if it pierces them a second time..

…born from his desire and desperation to prevent anyone from knowing his true identity, Yoshikage Kira's Killer/Deadly Queen evolved into Killer Queen Bites the Dust, which, if it pierces/cuts the Stand instead of the user, causes the Stand to become a Requiem Stand and become greater and change appearance...

Trans-mutating inorganic matter into a large volume of mochi, Charlotte Katakuri (One Piece) demonstrates his Awakened Devil Fruit powers.
Add a photo to this gallery
Retrieved from "https://powerlisting.fandom.com/wiki/Superpower_Evolution?oldid=1412765"
Community content is available under CC-BY-SA unless otherwise noted.