Enhance the performance of oneself or others.

The power to enhance the performance of oneself or others. Sub-power of Assistance Manipulation. Defined by Superpower Manipulation.

The user can temporarily enhance a variety of a target's performance such as speed, strength, durability, accuracy, powers, intelligence, etc. This power can also protect the target against any and/or all ailments that hinders them as well as accelerate their bodies healing process to gain a regenerative healing factor. The user can even apply more than one/all enhancements at the same time.

The user can also cause hindrance to the enemy in powers, physical and spiritual nature. 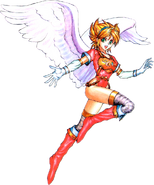 Nina (Breath of Fire) is skillful in support magic

Users of Streaks (Call of Duty) can call for outside factors to support them in battle.

While many Heroes (Dota 2) have some abilities to help their teammates, support role heroes, like the examples above, are tailored specifically for this purpose.

Hound of Nita (Kaiju Combat) can use her powers to heal, protect and support others.

Iron Man's armor (Marvel Comics) can provide him with a variety of support powers, such as strength amplification. 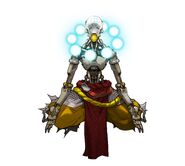 Zenyatta (Overwatch) is a support type of hero, who can heal allies or damage enemies.

Abathur (Starcraft) has a variety of support powers to his allies.
Ryphia H.png
Ryphia (Valkyrie Crusade) the angel of healing and support magic/enhancements.
Community content is available under CC-BY-SA unless otherwise noted.
Advertisement