Barbara Gordon (DC Comics) is an expert in surveillance.

Possess great skills as a surveyor.

"Am "I" the one who is being spyed on?!"
― Mamimi Yamagami (Sister Princess)

"You can't even call your wife on a comlink without Talon Karrde hearing about it."
― Han Solo (Star Wars Legends)

The ability to possess extensive, if not innate, knowledge of surveillance. Variation of Special Ops Mastery.

The user possesses great knowledge and skills of surveillance, able to spy on and map out areas with ease and gather intel.

Irene Belserion (Fairy Tail) can project her eye into the sky so survey everything that she sees.

Cannolo's stand All Along Watchtower (Jojo's Bizarre Adventure: Purple Haze Feedback) takes the form of a deck of 53 playing cards including one Joker, which can spread and gather information across large areas undetected. 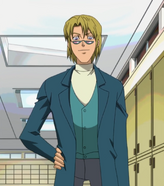 G-Force (G-Force)
Add a photo to this gallery
Retrieved from "https://powerlisting.fandom.com/wiki/Surveillance_Intuition?oldid=1545666"
Community content is available under CC-BY-SA unless otherwise noted.