Erin (You're Next) was able to kill her assailants due to being raised in a Australian survivalist camp by her father.

"Wah-ha-ha! Did you think a little thing like the end of the world was gonna do me in? The earth tried to swallow me up once or twice, but I just pried its jaws open and climbed back out!"
― Duncan Harcourt (Final Fantasy VI)

"Uninhabited planet. No resources, no supplies. No apparent way home. A lesser man would die here, I'll be home by Christmas."
― Dr. Ivo Robotnik (Sonic the Hedgehog: The Movie)

The power to have innate knowledge in surviving. Variation of Intuitive Aptitude.

The user has innate knowledge and intuitive understanding in survival and all skills applicable to survival, thus allowing them to easily survive in any and all environments, actively prepare for emergencies, including possible disruptions in social or political order, on scales from local to international. Survivalists often acquire emergency medical and self-defense training, stockpile food and water, prepare to become self-sufficient, and build structures (e.g., a survival retreat or an underground shelter) that may help them survive a catastrophe.

After awakening in a post-apocalyptic version of hyrule, Link (The Legend of Zelda: Breath of the Wild) demonstrates he has all the necessary intuition and skills to survive.

After months of being trained by trolls, Jim Lake (Tales of Arcadia) has survived the Darklands for nearly two weeks, despite having very little resources 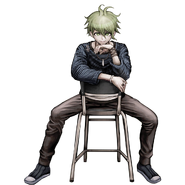 Rantaro Amami (Danganronpa V3)
Add a photo to this gallery
Retrieved from "https://powerlisting.fandom.com/wiki/Survival_Intuition?oldid=1654142"
Community content is available under CC-BY-SA unless otherwise noted.