Dean Winchester (Supernatural) has survived being beaten alive, dragged into the depths of hell and the savage purity of purgatory.

"Even if you have to squirm, struggle, and crawl, Survive!!"
― Grandpa Ten's final words to his grandaughter, Ka Ryo Ten (Kingdom)

"If you want to stay alive, then you gotta cut your own path to survival. That's all there is to it, right?"
― Ri Shin (Kingdom)

"Kill if you don't want to be killed? Wouldn't it be awkward if I die? This isn't a coincidence, nor goodwill. This is what the System needs. A Strong Sung Jin-Woo!"
― Sung Jin-Woo acknowledging his need to survive (Solo Leveling)
The power to enter a state of survival mode. Variation of Mode Switching.

User can go into a mode or form made to be a state of survivability, having the knowledge and abilities made for survival of the fittest. They will go the distance just so they can live to fight another day, even if it means taking extreme measures, that people are too scared to take. User can continue to live or exist, typically in spite of an accident, ordeal, or difficult circumstances.

In other words, do what you have to do to survive. 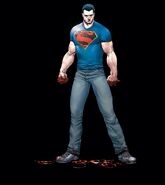 Chris Washington (GET OUT)