The power to fire blasts of energy/matter from swords and other such bladed weapons. Sub-power of Attack Powers. Variation of Razor Wind.

The user can use a sword or other such bladed weapon to fire powerful beams/blasts of energy/matter or use the beams to enhanced the slashes and stabbing powers of the blade.

Whenever Augus (Asura's Wrath) channels Mantra into his Wailing Dark, he can emit powerful sword beams that travel over or along the ground.

...and when he regained his Soul Reaper abilities powers, he could project blasts of spiritual energy that were as powerful as his old Getsuga Tensho with just the force of his sword.

...and using Trident to unleash a powerful spiritual energy slash in the blink of an eye.

Tohka Yatogami (Date A Live) uses the Final Sword: Halvanhelev to unleash a powerful slashing beam that can cut through a cliff.

With his Dimension Sword, Janemba (Dragon Ball Z: Fusion Reborn) can fire beams of ki that can cut through dimensions.

With his Super Saiyan Rosé Azure Dragon Sword, Goku Black (Dragon Ball Super) can use his Divine Lasso to fire explosive arrow-like projectiles that pierce through the body of his opponent.

The Celestial Spirit King's (Fairy Tail) Meteor Blade is a powerful slash that extends for miles and miles across the land creating an enormous fissure that divides the terrain.

...and imbues Stellar magic into his sword to use Galaxia Blade.

Zeus (God of War) using the Blade of Olympus to unleash Divine Retribution, a massive wave of godly might, wiping out all of the Spartan and Rhodesian soldiers.

Cloud (Final Fantasy series) can build up his Limit Gauge in order to use his Blade Beam Limit Break.

Inuyasha (InuYasha) like most wielders of demonic blades, is able to use the Tessagia's Kentatsu to cut and kill weaker demons with concentrated bursts of demonic energy....

...and when he became proficient enough with the Tessaiga, he was able to use its signature Wind Scar to fire a wave of demonic energy that has the power to kill 100 demons in a single sweep...

...he can also use the Backlash Wave to combine the Wind Scar with his opponents's attack to create a destructive energy torrent and send his opponent's attack back at them...

...and using his Meidō Zangetsuha to unleash dimensional blades that cuts and banishes enemies into the Netherworld.

Sesshōmaru (InuYasha), like most wielders of demonic swords, can use Kenatsu to cut anything with demonic energy without making physical contact...

...one example is when he first started using Tōkijin, he developed a Kenatsu that fires a barrage of demonic energy needles...

...and with his continued use of Tōkijin, he became able to use Kenatsu in the form of powerful energy waves...

...in the form of devastating energy blasts to eradicate an entire horde of lesser demons...

...and channeling his demonic energy into his Tōkijin and he can unleash it the form of his most powerful attack, Dragon Strike, a blast electrcity with power rivaling that of Inuyasha's Backlash Wave...

...he can also use his Bakusaiga to fire explosive blasts of energy that can destroy an entire horde of lesser demons.

When he had four Shikon Jewel shards embedded in his Banryū, Bankotsu (InuYasha) could channel their power to unleash his Dragon Hammer, releasing a destructive wave of energy that rivaled Inuyasha's Wind Scar...

...and after acquiring seven Shikon Jewel shards, he was able to channel their power into his Banryū to fire off his Heat Blast, cancelling out Inuyasha's Wind Scar....

...which enhanced the Kentasu of his Banryū which was a match against the Kenatsu of Inuyasha's Tessaiga, creating powerful shockwave...

...and after having turned the wrath of 1000 humans and 1000 demons into demonic energy, along with having four of the Shikon Jewel shards in Banryū, he was able to channel the combined power to unleash his Banryū Flash, a powerful wave of energy that was able to completely overwhelm Inuyasha's Wind Scar...

...and channel the layers of power into his Banryū to unleash his Hatred Ball.

After using half of the Naginata of Kenkon to absorb the Tessaiga's demonic energy, Hoshiyomi (InuYasha) was able to use the energy to unleash a powerful blast of light and darkness...

...he can also use the Naginata of Kenkon to unleash its Kenatsu in the form of a spherical shock-wave that is powerful enough to kill a large number of demons...

...and fire a Kenatsu that can open a vortex to the invisible void between Heaven and Earth...

...and while channeling the incredible demonic energy of two hundred and twenty-two demons into his Naginata of Kenkon, he can unleash his Crimson Sphere to exterminate his enemies into nothingness.

With his Goraishi, Kōga (InuYasha) is able to fire energy blasts that rival that of Inuyasha's Wind Scar.
Sō'unga Dragon Twister.gif
Sō’unga (InuYasha the Movie: Swords of an Honorable Ruler) can unleashed its Dragon Twister, a violent power powerful attack that annihilates everything and everyone in its path., 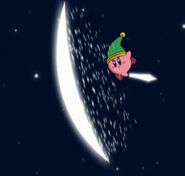 Kirby (Kirby Right Back at Ya!) emitting a sword beam.

Meta Knight (Kirby Right Back at Ya!) emitting a sword beam.

Raziel (Legacy of Kain) fires a Reaver Bolt, a variation of his telekinetic force projectile, from the Wraith Blade.

The Elf Swordswinger class (Lineage 2: Revolution) can use the Sonic Blaster skill to fire aura of their swords forward to deal damage to distant enemies.

The Elf Swordswinger class (Lineage 2: Revolution) can also use the Sonic Storm skill to fire a sword aura forward that ultimately explodes, damages, and knocks down enemies.

In his Awakened form, Zero (Mega Man X series) is able to use his Z-saber to unleash Genmu Zero, releasing two crescent energy waves that are almost impossible to avoid.

Being created by Gate from Zero's DNA, the Zero Nightmare (Mega Man X6) can use the Genmu Zero Kai a black version of Awakened Zero's Genmu Zero, but posseses unpredictable power and speed.

Zero (Mega Man Zero series) can release energy waves from his Z-saber via his Kougenjin or Zaneidan techniques.

Dreyfus (Nanatsu no Taizai) using Rankan to fire an energy beam from the tip of his sword that pierces through any opponent.

When he wielded the Shichiseiken, Saga (One Piece: The Cursed Holy Sword) could use Yokazan to create projectiles of cursed fire in the form of waves or explosive fireballs.

Adam Taurus (RWBY) can channel impacts from attacks with his sword and unleash them as a deadly beam.

With his own Master Key, Kagato (Tenchi Universe) could project powerful energy slashes that were able to knock back his foes with great force.

Link (The Legend of Zelda series) can infuse his Master Sword with heavenly energy to unleash the Skyward Strike that strikes anything in its path.

When Leonardo (Teenage Mutant Ninja Turtles 2003) wields Gunshin, he is able to use the sword to project the white flames of the dragon king.

When Raphael (Teenage Mutant Ninja Turtles 2003) wields Banrai he can send shockwaves that can destroy stone and strike demons.

Ludwig, the Holy Blade (Bloodborne) unleashing a massive beam of lunar energy with the Holy Moonlight Sword.
Add a photo to this gallery
Retrieved from "https://powerlisting.fandom.com/wiki/Sword_Beam_Emission?oldid=1340571"
Community content is available under CC-BY-SA unless otherwise noted.