The Canis Lykaon (Highschool DxD) is an independent Avatar Sacred Gear that originates from the Ame-no-Ohabari, giving it the ability to transform into the divine sword itself.

Transform into a sword.

The power to use the traits of swords. Technique of Sword Manipulation. Variation of Weapon Physiology.

The user is or has the ability to take on the form of a sword or swords. Users' transformed form is anatomically identical to their normal form, aside of being made of swords, in which case it contains all to organs and is somewhat vulnerable to attacks. Alternately the user can transform into homogeneous matter, without any part of their form being more important than the other. 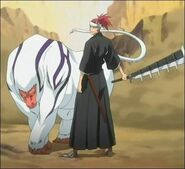 Zanpakutō such as Renji's Zabimaru (Bleach) are living weapons wo's default form is a katana.

Napoleon (One Piece) can transfer its own soul into a retractable cutlass, becoming a cutlass homie. 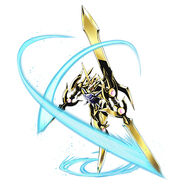 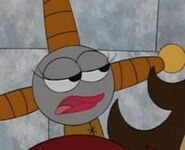 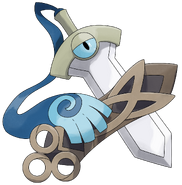 Honedge (Pokémon) the sword pokemon.
Add a photo to this gallery
Retrieved from "https://powerlisting.fandom.com/wiki/Sword_Mimicry?oldid=1412440"
Community content is available under CC-BY-SA unless otherwise noted.