Raziel (Legacy of Kain) wields the Wraith Blade as his symbiotic weapon.

Utilize symbiotic weapons.
The power to use weapons that are symbiotically bonded to the user. Variation of Symbiotic Connection and Power Weaponry

The user possesses a weapon that is symbiotically bonded to them, allowing them to control the weapon and influence it's power and properties.

Jaime Reyes A.K.A. Blue Beetle (DC Comics) is symbiotically attached to the Scarab, allowing him to manipulate it's form and functions at will. 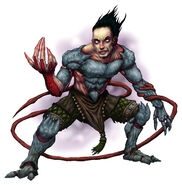 Kai'Sa, Daughter of the Void (League of Legends)

All-Black (Marvel Comics), the first Symbiote, usually takes the form of a sword when bonded to a host.

As God of the Symbiotes, Knull (Marvel Comics) is capable of forming new symbiotes and Exolons composed of the living abyss from his own shadow, including the first symbiote, All-Black.
Add a photo to this gallery
Retrieved from "https://powerlisting.fandom.com/wiki/Symbiotic_Weaponry?oldid=1508609"
Community content is available under CC-BY-SA unless otherwise noted.