Leone (Akame ga Kill!) uses her Imperial Arms called Lionelle that utilizes a sentient power that grants her the abilities and the resemblance of a lion.

The power to use powers that come from the symbolism of something. Form of Magic. Not to be confused with Symbolic Power Manifestation, Symbol Magic and Symbolic Attack.

User is part of a magical system that give a special semi-sentient power core, that work as source of the powers, that analyze the user and create an "avatar-like image" that represent the user and that is located inside the core and the user's mind, after that the core will give one or more ability related to the avatar's symbolism.

Although there are various cores, it's possible to divide them into different categories that are animals, mythological creatures, heroes, gods, supernatural beings, and mixed. 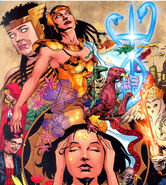 Promethea (Wildstorm) is an entity from the Immateria, a realm where all symbols and meanings behind imagination reside. Because of this, she is able to utilize the symbolic meanings behind virtually anything to her advantage.
Add a photo to this gallery
Retrieved from "https://powerlisting.fandom.com/wiki/Symbolism_Power?oldid=1508612"
Community content is available under CC-BY-SA unless otherwise noted.