Synchronize one's body movement with another

The ability to synchronize one's body movement with another to match what their doing. Sub-power of Motor-Skill Manipulation and Body Manipulation. Opposite to Mirror Image.

The user is able to cause one's body movement to become linked and/or synchronized with another person or group of people whether naturally or not. They can even synchronize one's heartbeat or bodily functions with the other person (given if their physiology are the same). 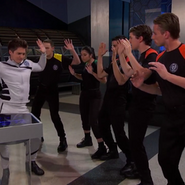 If Chase (Lab Rats) uses his Override App to assume control on several bionic subjects at once, it will cause them to synchronize their movements instead of doing what Chase tells them.

Midnight Entity (Doctor Who)
Add a photo to this gallery
Retrieved from "https://powerlisting.fandom.com/wiki/Synchronized_Movement?oldid=1662267"
Community content is available under CC-BY-SA unless otherwise noted.