Glorian (Marvel Comics) can tap and manipulate tachyons and can create hyperspatial "rainbow bridges" which can transport himself, or others if he is present, at trans-light speeds

User can create, shape and manipulate tachyons, a hypothetical particle that always moves faster than light. Just as an ordinary particle such as an electron can exist only at speeds less than that of light, a tachyon can exist only at speeds greater than that of light. At such speeds, its mass would be real and positive, on losing energy, a tachyon accelerates; the faster it travels, the less energy it has.

Toyman (Justice League) created an Energized Tachyon Stream that can send victims into the future, which he believed to be a disintegration beam due to not understanding his own creation.

The Silver Samurai (Marvel Comics) generating a tachyon field, which he usually channels through his sword to increase its cutting power to the point of cutting through virtually anything. 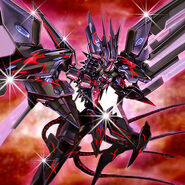 Number 107: Galaxy-Eyes Tachyon Dragon (Yu-Gi-Oh!) lives up to its name, capable of traveling backwards in time to reset situations to its advantage.